“Tightening relations with Southeast Asia represents a major opportunity for the Hungarian economy and Hungarian enterprises”, Minister of Foreign Affairs and Trade Péter Szijjártó said in Budapest on Friday following a meeting with Secretary of Foreign Affairs of the Philippines Teodoro Locsin.

At the joint press conference held following the meeting, the Minister pointed out: “A few years ago Hungary launched its Eastern Opening policy, one of the focuses of which is Southeast Asia, in view of the fact that it is one of the world’s most rapidly developing regions”. “The explosive economic growth also means an increased demand for imports, which represents a major opportunity for the Hungarian economy and for Hungarian enterprises” he explained.

“More and more Hungarian enterprises are realising continuously increasing exports to the Philippines, and exports increased by 71 percent in the first 11 months of last year”, he stated. “The goal is to help Hungarian companies achieve an increasing share of the market, in the interests of which we have convened a session of the Hungary-Philippines Joint Economic Committee”, he told the press. “The food industry and water management could be the flagship areas for exports”, he noted. 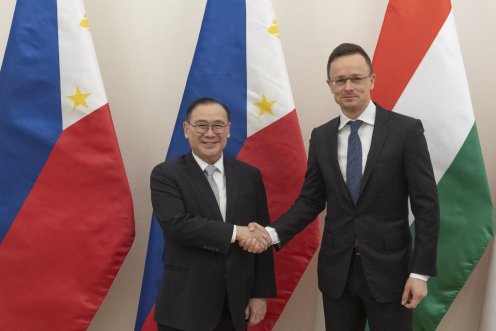 “Hungary expressed its solidarity with the people of the Philippines after the Islamic State terrorist organisation carried out an attack against a Catholic church there. Hungary that the first to offer assistance and provided ten million forints in emergency aid to help the injured and the families of the victims”, he added. The Minister said that in his opinion this attack also indicates that the global fight against Islamic extremism, which has always been hotbed for terrorism,  must be increased.

Teodoro Locsin said his country is grateful to Hungary for its support of Christian communities, and for standing up in defence of Christian communities in the United Nations. He said that in his view Hungarian-Filipino political and economic relations are strong, calling agriculture and water management the main areas of cooperation.

In reply to a question, Mr. Szijjártó confirmed that a medium-range air defence system will be established to protect strategically important facilities. “Negotiations on the procurement of the system are underway, and in view of the fact that American companies are among the frontrunners in the production of such system, negotiations are also ongoing with the United States on possible procurement. The procurement source will be made public once the negotiations are successful”, he declared. Also in reply to a question, the Minister spoke about the fact that Hungary is a committed member of NATO and is proud to be a part of the world’s strongest military organisation. “This, however, does not exempt it from having to develop its own defence capabilities, so it can defend itself if there is trouble. The development of its own defence infrastructure is indispensable from the perspective of guaranteeing Hungary’s security, and it would be irresponsible government politics if Hungary failed to develop its own defence capabilities and did not set as its target that it must be able to protect itself”, he said.

Teodoro Locsin told the press: “Similarly to Hungary, the Philippines also believes that it is extremely important to develop the country’s own defence capabilities”. “We cannot be dependent on others”, he added.

Cabinet Office of the Prime Minister/MTI