Visit of the Minister of Foreign Affairs and Trade of Hungary, H.E. Mr. Péter Szijjártó to the Philippines (15 October 2020)

Home / Visit of the Minister of Foreign Affairs and Trade of Hungary, H.E. Mr. Péter Szijjártó to the Philippines (15 October 2020)

Hungarian enterprises will be rehabilitating the largest lake in the Philippines

“Hungarian enterprises will be rehabilitating, and improving and monitoring the water quality of the largest lake in the Philippines within the framework of the thirty-million-dollar program, in addition to which they will be shipping water purification equipment to every region of the Southeast Asian county, thereby assuring the population’s supply of clean drinking water”, Minister of Foreign Affairs and Trade Péter Szijjártó announced on Thursday following his negotiations in Manila.

During his visit to Manila, Mr. Szijjártó held talks with Secretary of Foreign Affairs Teodoro Locsin and Secretary of Trade and Industry Ramon Lopez. The Minister’s is the highest level foreign diplomatic delegation to visit the Southeast Asian country since the beginning of the coronavirus pandemic. 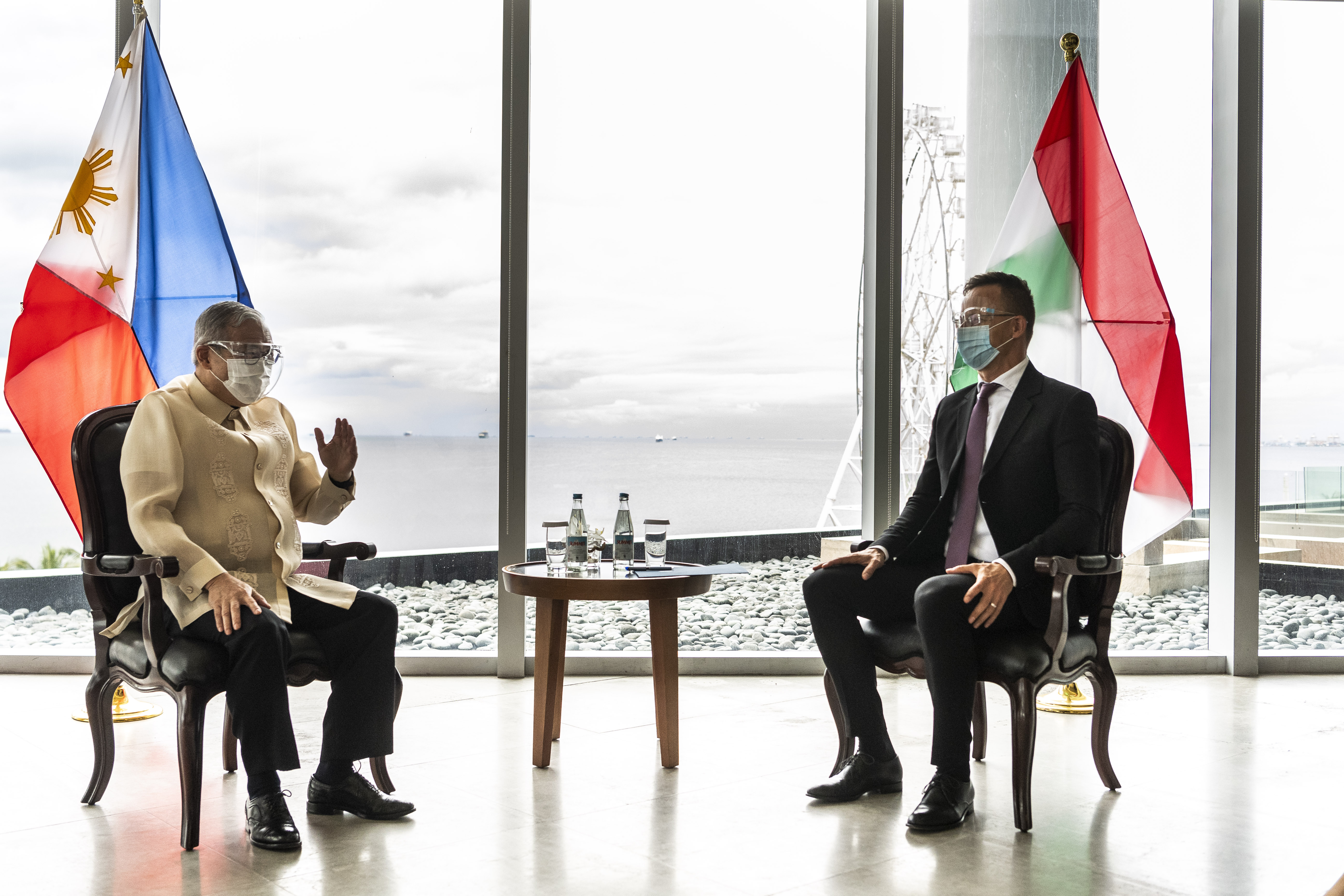 During his negotiations in Manila, the Minister concluded an agreement on the launching of a tied aid loan program, which will be realised by Hungarian enterprises. “Amongst others, Hungarian enterprises will be performing the rehabilitation of Lake Laguna, which is the largest lake in the Philippines with an area of over 900 square kilometres. The lake, which lies close to the capital Manila, suffers from a high level of pollution, as a result of which it cannot be used for tourism or other purposes. The Philippine government wants to change this through the major involvement of Hungarian enterprises in the project”, he explained.

Mr. Szijjártó pointed out that the future success of the Hungarian economy is also greatly dependent on Hungarian enterprises that are capable of producing technologies and products that are acknowledged and sought after abroad being able to reinforce their foreign positions. “However, in view of the coronavirus epidemic there is now much greater and tougher competition for these market positions, as a result of which states are also entering this new type of competition with much greater impetus, and assisting their own enterprises on foreign markets”, he added. “We must now fight hard for the international market positions of Hungarian enterprises. The Hungarian government is also ready to provide all possible political support to Hungarian enterprises in Southeast Asia”, Mr. Szijjártó said. 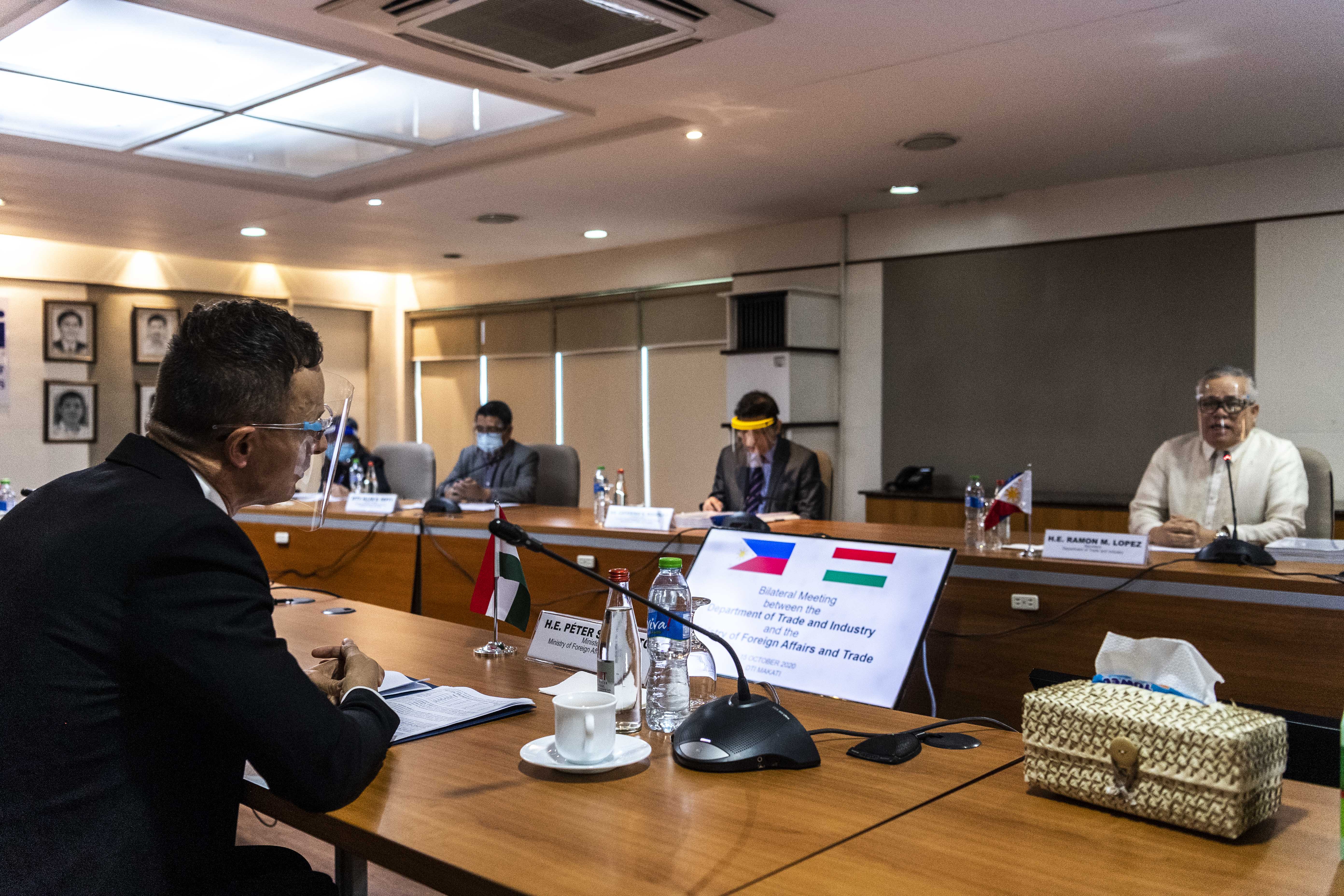 The Minister drew attention to the fact that Southeast Asia happens to be one of the traditional markets of Hungarian enterprises in view of the fact that the economies of the region’s countries are growing dynamically, in addition to which the fundamentally natural challenges they are facing are generating major demand for Hungarian technologies. “One of these areas is water management, in which Hungary has developed technological and engineering solutions that are globally competitive, and unique in certain areas. There is also huge demand for Hungarian water management solutions in the Philippines”, he stated.

The Hungarian delegation also lobbied in the interests of Hungarian food industry products while in Manila, in view of the fact that there is increasing demand for high-quality, healthy food industry products in the region, the Minister pointed out. “There is a good chance that following the passing of the swine fever and bird flu epidemics, Hungarian poultry and pork products will also receive the opportunity to return to the increasingly dynamically developing Philippine market. This will mean major export turnover for more Hungarian enterprises”, the Minister stated.

“It in the interests of Hungary and the Hungarian economy for the global economy to be as open, free and fair as possible, and for this reason the Hungarian government is calling on the European Union to restart the previously stopped negotiations on a free trade agreement with the Philippines ‘at lightning speed’, because the more freely it will be possible to export to the island nation, the better it will be for Hungarian enterprises”. Mr. Szijjártó said.

During the Minister’s visit to Manila, an agreement was also concluded on the fact that Hungary will be offering thirty scholarship places to Philippine students to attend Hungarian universities with the framework of the government’s Stipendium Hungaricum program.

(Ministry of Foreign Affairs and Trade/MTI)